Lets look at a traditional expensive method of shifting profits from your foreign company to you, the U.S. Shareholder. (Part I)

This is a very recent Tax Court Case, September 2018, where a husband and wife, named Barry and Rochelle Smith, were the grantors of two Domestic Grantor Trusts.  I will use some leeway to fill in areas not noted in the Tax Court Case itself that I believe is more probably than not as we move through this scenario. 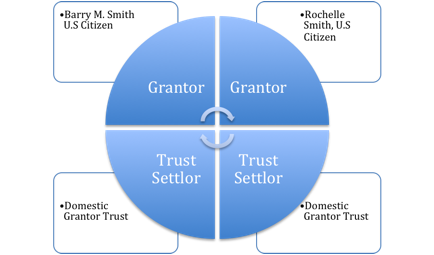 Since the totality of this scenario has international entities and transactions, I would assume that the trusts were created outside of the United States, but has fulfilled the conditions of U.S. Treasury Regulations § 301.7701-7 that the trust is a domestic trust if the a court within the United States is able to exercise primary supervision over the administration of the trust and one or more U.S. citizens have the authority, under the trust instrument, to control all substantial decisions of the trust.  A Domestic Grantor Trust also is a pass-through or flow-through entity in which the income or loss of the Trust passes through the Trust, without paying any tax, and on to the beneficiaries.

At this point, the Grantor Trust seems somewhat innocuous and innocent, but if any anytime the Grantor(s) elect to either have the trust not be subject to the jurisdiction of a U.S. court or the Trustee a foreign person; then the trust automatically transmutes into a foreign trust and a whole transformation happens to it stream of income and assets as it applies to US taxation, US reporting requirements and assets beyond the reach of US creditors, more on this later.

By Michael B. Nelson, Esq.